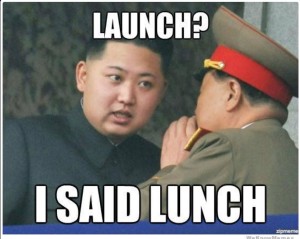 Kim, you can’t be serious! I realize you live in a self-imposed hermit kingdom where questioning your fat headed notions results in being thrown to actual dogs but surely you’re aware of Baker’s Law of American Cluelessness.

No matter what the topic of conversation roughly one-third of the American public won’t have a freaking clue what you’re talking about.

I can assure you that an embarrassingly large percentage of Americans have no idea where, or what, Guam is and, even more disturbingly, even if they know it’s an island somewhere in the Pacific they may think it’s in danger of tipping over if too many people stand on one end.

Let’s suppose you lose your mind, (I’m being sarcastic Kim), and nuke Guam. If we don’t immediately destroy you can expect this from the American public.

Kim nuking Guam is a big suicidal mistake. Don’t get me wrong. I enjoy grand gestures and heroic deaths. Achilles didn’t garner eternal glory by coming home from the Trojan War and growing olives. I know you’re under pressure to live up to dear dead old dad and to dearer older deader granddad. I know you feel inadequate and will never be worthy of the aggrandizing bullshit you force feed your people. So let me help you by selecting nuke worthy American targets. Don’t misconstrue my help. If you hit any of the following we will still exterminate you and your comrades.

Instead of Guam consider:

Kim, you can’t win but with judicious target selection, you can make a difference. As a wise shoe maker once said: “Just do it!”

This site uses Akismet to reduce spam. Learn how your comment data is processed.